Senegal. In the spring of 2008, the protests that started in November the year before continued against rising food prices. On March 30, police launched tear gas at protesters in Senegal’s capital, Dakar, which sought to conduct a protest march against deteriorating living conditions as a result of continued food price increases. The demonstration, organized by consumer organizations, was attended by opposition leaders such as Socialist Party leader Ousmane Tanor Dieng.

On April 27, more than a thousand people carried out a protest march in Dakar against the price increases without the police intervening. The protesters carried on empty rice sacks to show that the staple rice was becoming a luxury commodity that fewer Senegalese could afford. The week before, President Abdoulaye Wade had promised that the country would become self-sufficient for staple goods in 2015 through a major investment in cereals, including a fivefold increase in rice production. Currently, Senegal exports its best rice, while the rice consumed by the Senegalese largely has to be imported.

During the year, a lawsuit was prepared in Senegal against the doomed former Chadian dictator Hissène Habré, who since he was deposed in 1990 lives in a country escape in Senegal. In April, the Senegalese Parliament amended the constitution so that the country’s courts can try crimes committed in other countries and crimes committed over ten years ago. In August, Habré, sometimes called Africa’s Pinochet, was sentenced in his absence for human rights violations by a Chad court. The Senegalese authorities set up a special court for the trial of the former dictator, but at the same time Justice Minister Madicke Niang expressed doubts about holding a lawsuit in the country when Habré was already sentenced in Chad.

On a proposal from the ruling Senegal Democratic Party (PDS), the National Assembly, where the PDS is in the majority, voted in July for a legislative amendment to extend the president’s term of office from five years to seven years. However, the constitutional amendment must be approved by the Senate and the President in order to be introduced. The new rules will only take effect in 2012 when the current president, 82-year-old Abdoulaye Wade, will leave his post. Some members of the opposition criticized the proposal itself, but above all, the opposition was opposed to the government party’s way of introducing the change in the law. They pointed out that such a fundamental change should be approved in a referendum. Analysts suspect that President Wade is training his son to take over for him and that by extending the president’s term, he is trying to weaken political opponents.

On December 23-24, riots erupted in the mining town of Kédougou in the southeastern part of the country. Young people demonstrated against difficult living conditions and attacked government buildings. When the police opened fire, the vandalism worsened. A man, who according to witnesses did not participate in the protests, was shot dead. About 30 people, most of them protesters, were injured. About 26 youths were arrested. A human rights organization has accused the police of wrongfully arresting young people and torturing them. After the rattles, many young people must have moved out into the bush to escape the police. 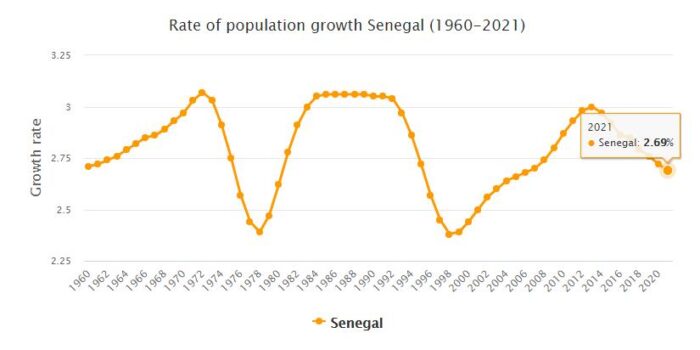