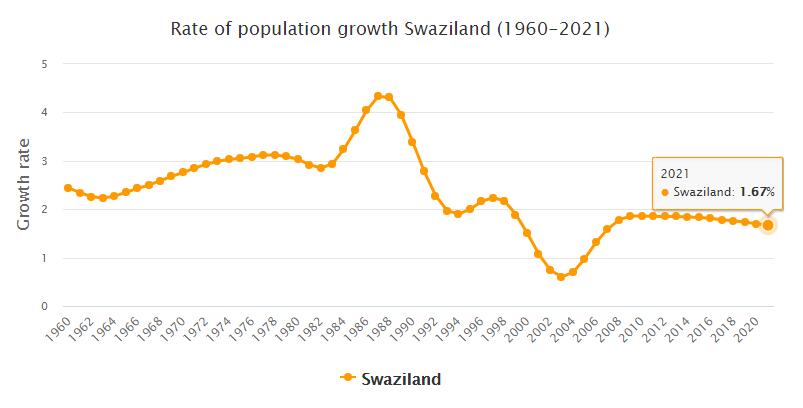 Swaziland. New figures during the year showed that Swaziland’s population decreased by about one-fifth to one million since the last census in 1997. The cause was the severe HIV epidemic. Swaziland has the world’s highest proportion of HIV-infected among the entire population, 26 percent. The prediction is that two-thirds of the country’s 15-year-olds will die from AIDS unless the spread of infection is slowed.

In August, more than 1,500 HIV-infected women staged a protest demonstration against eight of King Mswati’s thirteen wives traveling with a companion for a costly shopping trip abroad. The women condemned how tax money from one of the world’s poorest and sickest people was used.

The monarchy dissolved the parliament for the September elections. Political parties were banned and only individual candidates were allowed to stand.

The election was surrounded by protests from unions and banned opposition parties that demanded democracy with multi-party systems. The election was described by government critics as meaningless and even worse than in Zimbabwe, as all parties were banned. Police arrested Democratic activists who were planning a protest block near the border with South Africa.

On election day, polling stations were guarded by armed police. Voting was reported to be higher in rural areas, where the king is more popular, than in cities where the banned opposition has its strongest support. The banned opposition movement PUDEMO (People’s United Democratic Movement) described the election as a shame and an attempt to mislead international opinion.

After the election, Barnabas Sibusiso Dlamini was appointed new Prime Minister. The opposition considered that Dlamini had been appointed for his loyalty to the king and accused him of failing to rule out the rule of law during his first term as head of government.

Shortly after the election, a failed bomb attack was carried out at one of King Mswati’s palace outside the capital Mbabane. A Swazi activist and an activist from South Africa were killed when they placed the bomb. According to the government, PUDEMO had said it was behind the attempted attack. PUDEMO leader Mario Masuko was arrested and the first to be prosecuted under a new anti-terror law that could provide 25 years in prison. Authorities claimed that other bombs were found near railroads, bridges and roads. According to the opposition, the attempted assault was a result of widespread frustration over the ban on political parties. 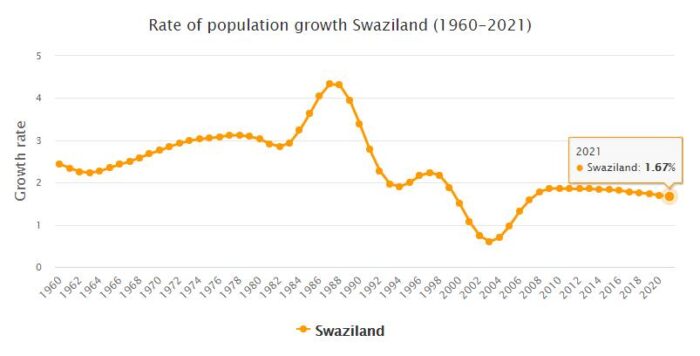 The Swaziland, if we take into account the level of gross national product per capita (1080 US dollars in 1992), is a relatively rich country: in fact, favored by the climate, especially as regards rainfall, it has a decent agricultural sector, relies on mineral deposits and has a fairly developed manufacturing industry, which participates for about 41.6% (1992) to the formation of the gross domestic product. Among all economic sectors, agriculture remains the fundamental activity, occupying 64.6% of the active population, and supplies most of the export products. Main crops are sugar cane (5 million q of sugar in 1992), cotton and tobacco; domestic consumption includes maize (1,530,000 q), sorghum (50,000 q), rice (30,000 q) and sweet potatoes (40,000 q). Traditionally important is the breeding of livestock, favored by extension of meadows and pastures, which cover 68.2% of the territorial surface; cattle prevail (753,000 heads), followed by goats (406,000) and poultry (over 1 million). From the exploitation of forest resources 2,223,000 m3 have been obtained of timber in 1991, partly processed locally, partly exported. The subsoil supplies asbestos (32,300 t in 1992), gold, diamonds, tin, coal (100,220 t); there are also reserves of kaolin, talc and iron ores.

The production of electricity is modest (570 million kWh in 1992), which is imported from South Africa. This shortage of internal energy production represents a significant obstacle to the industrial development of the country, which even in recent years has experienced a moderate increase in production. The main manufacturing branches are food, textile and woodworking. The road network reaches just 2800 km. The railway network is represented by an important line (370 km long), which, starting from the mining center of Ngwenya, near Mbabane, crosses the whole country and, continuing beyond the borders, connects with the Mozambique railway network to the port. of Maputo, a natural outlet to the Swaziland sea. Another small railway section (93 km) joins, instead, to Lavusima with the South African lines through which it reaches the ports of Durban and Richards Bay. The main airport is Matsapa, near Manzini.

The trade balance has a heavy deficit: the country exports sugar, wood pulp, asbestos, fruit, while it imports machinery and means of transport, food, fuel. The exchanges take place mainly with the Republic of South Africa and the United Kingdom.