Trinidad and Tobago. The country’s president George Maxwell Richards was re-elected in February for a second five-year term. He was installed on March 17 at a ceremony at the stadium on the outskirts of the capital Port of Spain. In addition to specially invited guests, the public also got to attend the festivities for the first time. About 15,000 Trinidadians showed up. The president has a largely ceremonial role as head of state for the kingdom.

In April, the country’s highest court of appeal, the Privy Council in London, rejected opposition leader Basdeo Panday’s request that the trial against him in 2006, when he was convicted of not fully reporting his assets on an account abroad 1997-99, should not be reassigned. Panday was the country’s prime minister in 1995–2001. The 2006 prison sentence was appealed in March 2007, whereby Panday was acquitted.

The Cotonou Agreement was replaced in the autumn by a new Economic Partnership Agreement (EPA) between the EU and Trinidad and Tobago. EPA meant that tariffs and import duties on the EU market were almost completely eliminated for goods from the Caribbean. At the same time, the agreement meant that until 2033, Trinidad and Tobago would gradually eliminate most of the import duties from the EU. 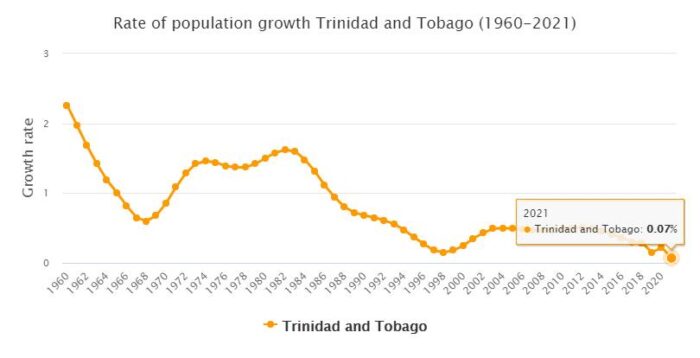 Demography and economic geography. – Island state in South America, off the Venezuelan coast. The 2011 census confirmed the division of the population (1,328,019 residents) Into two large ethnic components, Indians (35.4%) and Africans (34.2%), followed by minorities of mestizos (22.9 %), Chinese and others, which correspond to a plurality of religious affiliations (Catholics, Hindus, Muslims, numerous Protestant congregations, etc.). According to an estimate by UNDESA (United Nations Department of Economic and Social Affairs), in 2014 the residents were 1,344,235. Largely dependent on hydrocarbons, which represent 80% of exports, the country has tried to diversify the economy by encouraging investments in tourism and telecommunications.