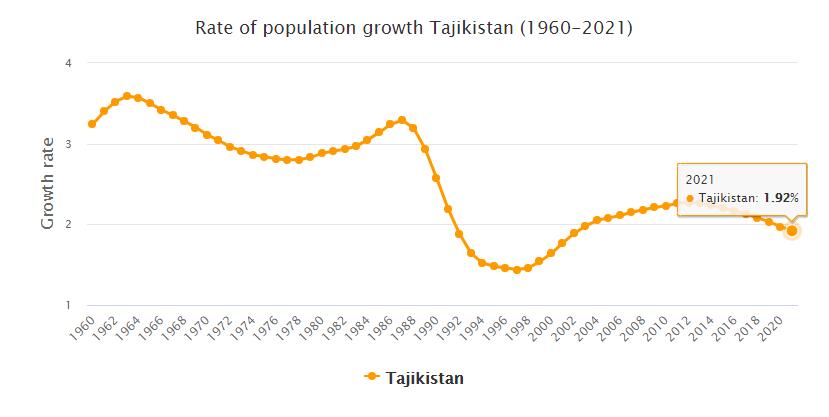 Tajikistan. The coldest winter in the memory of the people caused a serious supply crisis in the poor and heavily indebted Tajikistan. In February, tens of thousands of people were found to be malnourished after food prices tripled in a few months. In the midst of the severe cold, many residents lacked electricity, heat, water and enough food. In the mountains, villages were isolated because of the snow and people froze to death. UN Children’s Fund UNICEF assisted icy hospitals with blankets and small gas heaters. The government met with representatives of international lenders to discuss crisis loans, and the UN appealed to the outside world for assistance to Tajikistan for the equivalent of close to SEK 200 million.

Neighboring Uzbekistan shut down electricity supplies when Tajikistan could not pay its bills. The electricity shortage was partly remedied by Turkmenistan doubling its electricity exports to Tajikistan, whose own power plants were running at low speed due to frozen rivers.

In April, the International Monetary Fund (IMF) ordered Tajikistan to repay just over $ 47 million in loans granted on the basis of false information. The Central Bank of Tajikistan has acknowledged that it has provided air figures for the foreign exchange reserve in order to get higher loans and thus more support for agriculture affected by the severe winter.

In the wake of the cold winter, tensions and the struggle for water in the border region between Tajikistan and Kyrgyzstan increased in the Fergana Valley. About 150 Tajikistanis attacked those responsible for a dam built by Kyrgyz authorities. A threatening carnage was averted by opening the dam to fill irrigation channels on the Tajikistani side.

Opposition activist Dodojon Atovullo fled in the fall from his exile in Russia to France, fearing that Russia would agree to T’s demand for extradition.

In the fall, UN experts warned that a third of Tajikistan’s 6.7 million residents could be suffering from food shortages this coming winter, and calls for more help from the outside world. The government presented a program of measures to prevent the recurrence of last winter’s crisis. The supply situation had worsened during the summer due to severe drought and grasshopper swarms, and this year’s cereal harvest was 30-40 percent lower than in 2007. 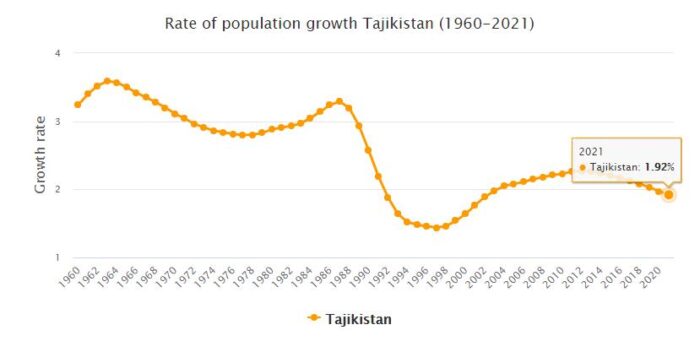 According to estimates (2009), the population of Tajikistan has exceeded the threshold of 7 million residents (it was just over 5 million in 1989, the date of the last USSR census). The birth rates (27%) and population growth (1.9%) are the highest among the former Soviet republics. The bloody civil war that affected the country during the 1990s, causing over 100,000 deaths and hundreds of thousands of refugees, has altered the ethnic picture of Tajikistan, with the release of a substantial number of Uzbeks and Russi. Today, 80% of the population is made up of Tajiks (they were 63% in 1989), 15% are Uzbeks (23%) and 1% are Russians (8%). The average density is 51 residents per km2. The population of Tajikistan is the least urbanized among those of the former Soviet republics (36%). In addition to the capital, Dušanbe (620,000 residents), only the city of Choduent (formerly Leninabad), the capital of the homonymous province populated mainly by Uzbeks, has a population of over 100,000 residents.

The Tajiks (Russian Tadžiki, Tajik Tāgīk) are the descendants of the ancient indigenous peoples of Central Asia, settled in the southern regions of former Soviet Asia, Afghanistan and Iran. The semi-nomadic mountain populations take care of breeding, while the sedentary Tajikistan of the plains base their economy on the cultivation of cereals and fruit trees, with the help of an improved artificial irrigation system. Skilled craftsmen, the Tajikistan are famous for their cotton and silk fabrics, for their work in leather, iron and gold. In ancient times the society of the Tajikistan was divided into clans with patrilineal descent. The language is Iranian, the Muslim religion.