Rwanda. Already in 2006, Rwanda had broken diplomatic relations with France. This after a French judge accused the circle of President Paul Kagame for lying behind the 1994 assassination of the then president who triggered the massacre of 800,000 Tutsis. In 2008, the situation deteriorated another step when President Kabuye’s President of the Protocol was arrested in Germany and extradited to France, while a French court halted extradition to Rwanda by the Genocide regime’s intelligence chief. A Rwandan commission that has been working since 2006, in a report, accused 33 French former senior political and military leaders of assisting in the genocide, including then-President François Mitterrand and then-Prime Minister Édouard Balladur.

The fact that Rwanda abandoned French as a language of instruction in the country’s schools and replaced it with English was another mark against the government in Paris.

In December, the UN-backed war crimes tribunal ICTR in Arusha in Tanzania sentenced Théoneste Bagosora to life imprisonment for genocide, crimes against humanity and war crimes. Bagosora, who was chief of staff at the Ministry of Defense in 1994, has been regarded as one of the brains behind the 800,000 Tutsi genocide. He is probably the most centrally located Hutu extremist sentenced by ICTR.

After a UN investigation accused Rwanda of meddling in the conflict in Congo (Kinshasa), Sweden withdrew its budget support of SEK 80 million to Rwanda.

Parliamentary elections were held in September. The dominant party, the former Tutsiger guerrilla FPR (Front Patriotic Rwanda), and its allies won big in the absence of opposition. Most noteworthy was that Rwanda became the first female domination country in parliament.

Rwanda is sending what the Ministry of Defense calls a security force to the Central African Republic, where an armed conflict is taking place. It comes after Rwandan soldiers in the UN force Minusca were attacked by rebels on their way to the capital Bangui. According to Minusca, the rebels have now been stopped. The Rwandan troop reinforcement consists of a few hundred soldiers, according to the Ministry of Defense.

Kabuga brought to UN court in The Hague

Felicien Kabuga has been taken from France to The Hague in the Netherlands, where he will be tried in the UN Court for, among other things, genocide and crimes against humanity in Rwanda in 1994 (see Democracy and rights). 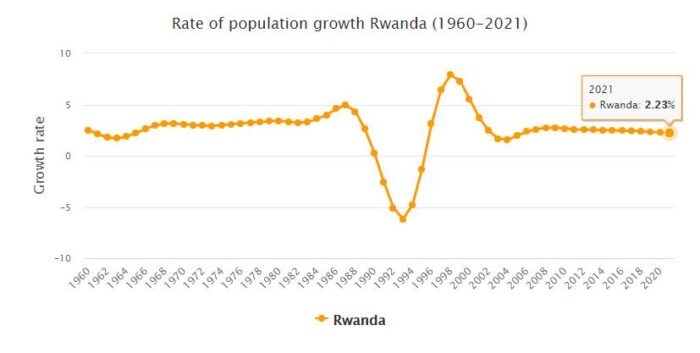 Central-eastern African state. The Rwanda (8,162,715 residents at the 2002 census) has to cope with a high rate of growth (in 2006 the fertility rate was 5.4 births per woman) which, in addition to the obvious economic consequences, has a strong impact on the health conditions of the population. Besides AIDS, malaria and tuberculosis are actually still very present (in 2005 the 3.1 % of Rwandans between 15 years and the 49 years was affected by acquired immunodeficiency syndrome) and led to a lowering of life expectancy at birth, an increase in mortality and infant mortality rates and a change in the distribution of the population by sex and age group.

Since the end of the inter-ethnic civil war (1994), despite the tensions still remaining alive, the economy of the Rwanda has experienced a slow but progressive growth (between 1995 and 2004 the increase in GDP was, in real terms, of 7.7 % per annum), which allowed the country to recover the levels prior to 1994, but which did not involve the majority of the rural population and largely depended on international aid. The diversification of production activities remains poor, however penalized by a chronic shortage of electricity, and, however subject to climatic events, continues to be predominant, as it accounts for over 40% of GDP and ensures more than two thirds of exports (coffee and tea). The sector is the subject of government development plans, which have as objectives the increase of productivity, the extension of the cultivable area and the intensification of commercial relations with foreign countries. The industry is very weak and includes small factories for the processing of agricultural products, cement factories and tobacco factories. Mineral resources (such as natural gas, gold, cassiterite) are under-exploited also due to the lack of both investments and communication infrastructures (less than 10 % of the roads are asphalted and there is no railway network).