Guinea. The mass protests in 2007 meant that President Lansana Conté was forced to give in to the trade unions and the political opposition, among other things by giving the new Prime Minister Lansana Kouyaté greater influence. In 2008, however, it became clear that the president and the circle around him have largely succeeded in retaining their grip on power. Dissatisfaction with the government’s policy and increasingly tough economic conditions triggered a series of protests during the year, which in some cases led to fierce clashes between often young protesters and the security forces. However, the discontent expressions did not become as extensive as the year before.

In April, fuel prices increased overnight by 60 percent after the government abolished state subsidies. The following month, Prime Minister Kouyaté was dismissed by a decree from President Conté. It was speculated that it was Kouyate’s attempt to negotiate with foreign mining companies on his own that led to the dismissal. Bauxite accounts for most of the country’s export earnings.

Economist Ahmed Tidiane Souaré, who was previously Minister of Mines and Schools, was appointed new head of government. A few days later, militants revolted in three locations, demanding that they receive outstanding wages (the soldiers claimed that some of them had not been paid for several years), the right to cheaper rice and that the defense minister would resign. The presidential guard was deployed against the soldiers, and at least six people were killed. In June, a settlement was concluded that gave the insurgents higher wages and all the private soldiers were promoted. New violence, which required several casualties, erupted at the end of the same month when striking police officers demanded pay raises and better conditions. Later, teachers and health care workers also went on strike for better conditions.

The new government that took office on June 23 had 36 members. Ten of Kouyaté’s ministers were allowed to keep their posts.

For several weeks in October, there were also unrest in the mining towns of Boké and Mambia where the people protested that they had not received part of the profits from the mining operations. Freight trains loaded with bauxite were prevented from reaching the ports.

High fuel prices triggered new protests in Conakry in November. The government’s decision to cut prices by 20 percent failed to appease the protesters, who believed that even greater reductions should be possible when international oil prices were halved since July 2007. At least one person was killed in clashes between protesters and riot police. Behind the protests was also a general dissatisfaction with the fact that so few changes have been implemented since the unrest in 2007.

The parliamentary elections that would have been held at the end of the year were postponed indefinitely in November.

President Conté, who has been ill for a long time, passed away on December 22. The following day, a group of younger officers, led by Captain Moussa Dadis Camara, took power in a bloodless coup. Juntan promised free elections by 2010, and pledged to fight corruption and renegotiate mining contracts so that its profits would benefit the poor population to a greater extent. The coup was condemned internationally, and on December 29, G. was temporarily excluded from the African Union (AU), which demanded that new power holders be appointed in accordance with the Constitution. However, the coup makers received support from Senegalese President Abdoulaye Wade. Within the country, the coup was particularly welcomed by many young Guineans. On December 30, the country got a civilian head of government: the banker Kabine Komara. 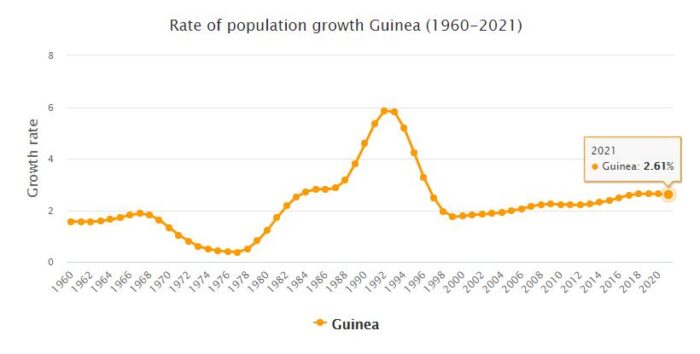